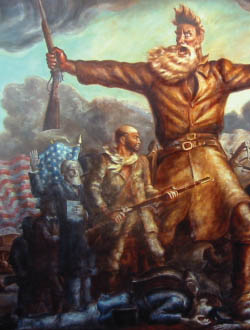 twitchy as a guillotine;

because he preached “Black” Liberation

was prophecy as irrefutable as sunlight.

He canted against a Federal army

as ridiculously as Don Quixote

He got cut down, right with his boys,

because he couldn’t destroy everything

Still, his Harpers Ferry raid was

nothing so vile as Frivolity.

His failed onslaught was no Kindergarten

of corpses bitten into, gnawed, mauled,

The refusal to advance Emancipation

was, surely, he believed, Malice.

His murders were not for Murder’s sake.

While others could Slavery condone;

Yes, he wanted to touch off Civil War –

and sought out ‘liberators’ as energetic

as the guillotines Robespierre oversaw.

They prepared in well-equipped woods –

under garlands of sun or moon

He had svelte pamphlets, a stout Bible.

He could see through even starless trees.

Don em as the day dawns;

doff em to bathe or to sleep.

Yes, his was a private “firing upon,”

but for republican purpose;

Someone had to tender

He got dragged to the gallows

and hanged in the wind;

now we drag ballads up

George Elliott Clarke is the E.J. Pratt Professor of Canadian Literature at the University of Toronto, and the Poet Laureate of Toronto, 2012-2015. His newest book of poetry is Traverse. 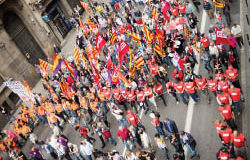