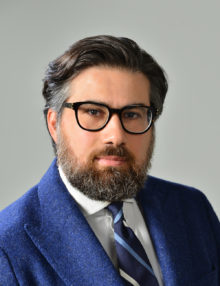 Sam Sasan Shoamanesh is the Vice-President of The Institute for 21st Century Questions and Managing Editor of Global Brief magazine. He has served the International Criminal Court (ICC) since 2005 in various capacities, including formerly as Chef de Cabinet to the Prosecutor of the ICC. In 2011, in an effort to raise greater awareness of the ICC in West Asia, and to promote the prevention of atrocity crimes in the region, he initiated and co-organized the first regional diplomatic conference on the ICC in West Asia, hosted in Doha. He previously worked for a number of other judicial bodies, including the UN International Criminal Tribunal for the former Yugoslavia and the International Court of Justice.

He is a past lead articles editor and member of the submissions committee of the Stanford Journal of International Law, and a past senior editor and board member of the Ottawa Law Review. He was called to the bar (Law Society of Ontario) in 2004.

Shoamanesh is an inaugural member of the council of advisers to the Global Institute for the Prevention of Aggression. He is the recipient of the 2012 Arthur C. Helton Fellowship, awarded by the American Society of International Law, and the 2013 Ordre du mérite, awarded by the Civil Law Section of the Faculty of Law, University of Ottawa – the Faculty’s highest distinction, recognizing alumni who have made exceptional contributions to the legal profession and society in general. He was selected as a Munich Young Leader at the 53rd edition of the Munich Security Conference.