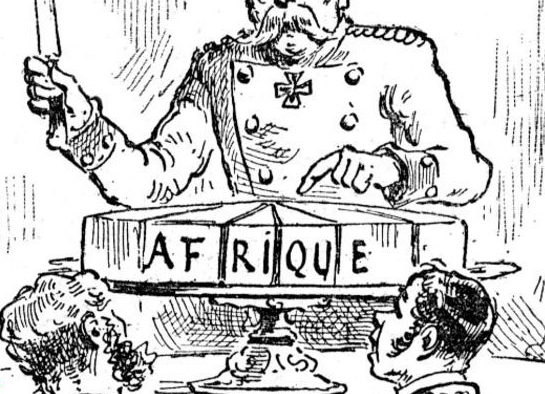 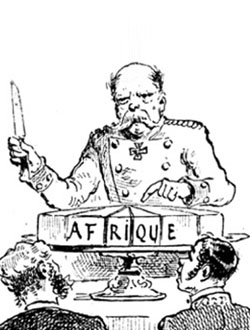 KINGDOM OF BELGIUM (KB): Empress Victoria needn’t swallow  every morsel of the Congo,

but leave a slice for our Emperor Leopold.

but mustn’t work Congolese into coffins.

should be Christians, not merely Caucasians.

KB: Save for at Isandlwana….

UK: That Zulu ‘Victory’ was a miracle

wrought by Hubris – an error, tactical.

US: In any event, there was a slaughter.

Recall: We torched your White House to smithereens.

US: And we whupped your ass at New Orleans….

KP: We scent the stink of History.

KB: What does Belgium want? No mystery:

Nothing too swollen; nothing we can’t digest.

UK: One piece of wedding cake? Next: The rest?

GERMAN FEDERATION (GF): The dogs of War are nervous!

UK: Her Majesty has no corpse tendencies.

GF: If Peace is not agreed, we seed maggots, flies,

and the English Channel becomes a decayed sea.

US: Divvy up copper, diamonds, the rubber tree.

Put away gunboats and barbed wire.

No more poaching each other’s colonies

US: The answer is more and more free-trade zones,

UK: What Hypocrisy! Admit that you make all

GF: But a treaty can’t be journalistic flimflam.

GB: You parrot the mantra of Uncle Sam.

US: Properly-coloured maps must now be made.

US: The problem with John Bull is

the troublesome rotundity of his

belly, a bloating that never sags.

KB: And the spider’s branching legs,

US: Threatening all with bulging crevices

of graves, an atlas of abyss upon abyss.

UK: You know that well, America!

GF: Nothing’s as unbudging as a cemetery.

FR: Colonialism is a glorified Infection.

before it becomes an autopsy.

All of us have a need for a necessary

swelling: The point is to distribute equally

the ‘beer monopoly,’ so to speak.

Excuse the metaphor. We want no mystique.

but only hands to work factories and farms….

Africa Post-Mandela and Beyond
INTERVIEW WITH NGAIRE WOODS February 25, 2014