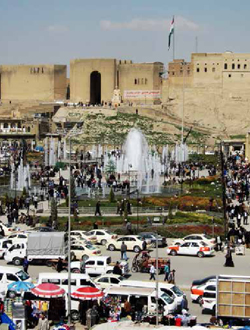 ..will be, more than ever, a de facto state. This is the closest that the Kurds anywhere will have ever come to what looks and feels like an independent state. But Iraq’s Kurds will still act with the utmost caution, fearing the reaction of regional powers – most notably Iran and Turkey.

Based on a solid consensus among political factions in Erbil and Sulaymaniyah, the Iraqi Kurds will choose not to declare formal independence – a symbolically significant step but one that, in practical terms, can do more harm than good to the cause of Kurdish self-determination in the long run.

While both Iran and Turkey have learned to live with Kurdish autonomy in northern Iraq, they have combined forces and are increasingly committed to opposing official independence for the Kurds. Tehran and Ankara use a simple carrot and stick strategy to achieve their ends. The authorities in Tehran have been busy cultivating an anti-independence consensus among Iraqi Kurds for some time. Tehran does not want an independent Kurdish state next door, fearing that it will mobilize Iran’s own large Kurdish minority of some seven to eight million – already approximately 10 percent of the national population, and almost twice as numerous as the Kurds in the Kurdish Regional Government (KRG) in Iraq.

Since the fall of Nouri Al-Maliki in 2014 and the rise of the Islamic State, Tehran’s message to the Kurds of Iraq has been unambiguous: stay within Iraq, keep your autonomy, and we will continue to trade and engage with you. If, however, you choose to break away, then we will do what we can to undermine any nascent Kurdish state. On this logic, Tehran would reconsider the multi-billion dollar annual trade that it conducts with the KRG. It would use its political leverage inside Iraqi Kurdistan to undermine the political leaderships in Erbil and Sulaymaniyah. And it would look to sponsor new Iraqi Kurdish political voices to weaken any independentist posture.

Iran benefits in this strategy from the fact that Ankara has abandoned its earlier flirtation with accepting Kurdish independence. As with the Iranians, the Turks now also fear a spillover scenario in which Kurds across the region – some 30 million people spread across Iran, Iraq, Turkey and Syria – mobilize against existing international borders carved up in the region following WW1. As President Erdogan is no longer confident that Ankara can be the principal gatekeeper to Iraqi Kurdistan, he finds himself in agreement with the Iranians that Kurdish autonomy in Iraq is tolerable, but that independence can have unintended consequences. The Iraqi Kurds will therefore duly decide that the timing is still not ripe for declaring independence.”

» Alex Vatanka is a Senior Fellow at the Middle East Institute in Washington, DC.

…will have to appreciate Tehran’s position on the Kurdish question. Due to the current situation in Iraq and Syria, with both countries on the verge of disintegration, any move toward an independent Kurdistan will fuel further instability. Indeed, it may accelerate the collapse of both countries, causing chaos to spill over to other regional countries. Iran will therefore strongly oppose the idea of an independent Kurdistan and will advise against it.

Note also that the Kurds in Iran have traditionally been treated very differently from their compatriots in Turkey and Iraq. They have always been represented through their MPs in the Iranian Parliament. Under President Ahmadinejad, Mohammad Reza Rahimi, the first vice president of Iran, was from Kurdistan. Kurds have always had representation in different administrations. Coincidentally, the Iranian Kurds claim that they are the original Iranians and have strong sentiments of national pride toward Iran.

The Iranian constitution has fully secured the rights of all minorities, including the Kurds – in some cases beyond what one would find in the constitutions of Western countries. In short, Iran embraces its Kurdish brethren. If, however, any issues or concerns arise in respect of minority issues and grievances, efforts should be made to solve them based on the Iranian constitution.”

» Seyed Hossein Mousavian is a Research Scholar in the Program on Science and Global Security at Princeton University’s Woodrow Wilson School of Public and International Affairs. He is a former diplomat who served as Iran’s Ambassador to Germany (1990-1997), head of the Foreign Relations Committee of Iran’s National Security Council (1997-2005), and spokesman for Iran in its nuclear negotiations with the EU (2003-2005).

…will provide a leading example of good governance for the rest of the Middle East.

The Kurdistan Region (KR) of Iraq has come a long way. Its formation as a de facto state in October 1991 was a milestone in the history of the Kurds – a tumultuous and bloody history that saw Kurds suffer oppression, persecution, genocide and a civil war between two main parties led by Masoud Barzani (KDP) and Jalal Talabani (PUK). Unlike the Shia and Sunnis in the rest of Iraq, the Kurds remedied divisions among themselves and created an environment conducive to foreign investment, and also strong relations with regional neighbours and international powers. This has allowed them to expand their political and economic autonomy from the rest of Iraq. Gradual expansion of this autonomy and ultimately independence are inevitably part of the roadmap for Kurdistan.

Still, the road to independence is rocky. A declaration of independence would evoke mixed reactions internationally and regionally. Landlocked by countries dismissive of the idea of a Kurdish state, Kurds must reach beyond the region to receive necessary recognition. Iran, Turkey and Syria consider a Kurdish state a threat to their sovereignty, as it would fuel aspirations for autonomy in provinces with substantial Kurdish populations.

While the Middle East remains in turmoil, with a poor record for regional cooperation, and with the radical jihadists of the Islamic State plundering and pillaging, the KR is emerging as a promising economic player. Increasing economic integration seems to be leading its neighbours to reconsider their persistent policies against Kurdish aspirations. Ankara’s new rhetoric toward the KRG demonstrates this. Still, recognition remains a very unlikely scenario at this stage.

» Armin Seif is the Programme Director of Democracy and Governance Programme at the Middle East Research Institute in Erbil, Kurdistan Region, Iraq.