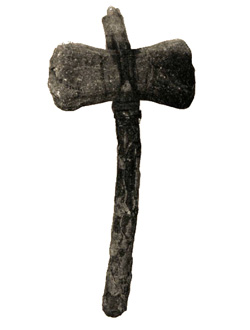 How human history is invented, written, encountered and, in the end, irresistible

For hundreds of thousands of years of human history, we had no history. We call that part ‘pre-history’ – thus cagily rendering the deep past as a semantic extension of, well, history. It is often suggested that the study of history is useful preparation for the future. Edmund Burke said: “Those who don’t know history are destined to repeat it.” But Nietzsche, in his essay “On the Use and Abuse of History,” tells us that the weight of history saps the will; that is, in order to get on with life, we are better off forgetting history.

Philosophies of history are never in short supply, from Carlyle’s Great Man theory to Marx’s dialectical materialism, to Spengler’s rollercoaster rise and fall of civilizations, to Vico’s spirals, the endless cycles of the Mayan calendar, or the elegant gyres of W. B. Yeats.

History is something, yes, but the shape is fuzzy. We seem to be moving forward – perhaps only because we don’t seem to be able to turn back. Are we progressing up or down? Or were the ancients right – that is, that we are trapped in Ixion’s Wheel, suffering endlessly the Eternal Return of whatever? Is there an end to history, as Francis Fukuyama announced prematurely in 1989? Will it end with Rapture and the Day of Judgment, or the metaphysical extinction of the Hindu, or the universal hegemony of modern liberalism (see Fukuyama), nuclear obliteration (see Nevil Shute’s On the Beach for one fictional end of history), or ecological dwindling?

Individual humans don’t have history, but they live in it – rather like standing in an invisible river (see Heraclitus). But sometimes that river suddenly roars and bites you: the dead of Hiroshima, the victims of Dachau, and the inhabitants of mass graves in Bosnia and Cambodia can all testify to unfortunate encounters with history. Much of history, it seems, is a litany of such unfortunate encounters.

Humans retain memories, and thus can observe change. Observing change is how we perceive time – in writing our observations down, we create history. Writing and history seem oddly linked. Before writing, we had myths, fables and creation stories. But to create history humans needed the capacity to store more data than the individual brain could manage – hence, writing, paper, books and, yes, even magazines. The invention of writing is one of those slingshot events – a sudden spasm of new activity, organization, human possibility.

Much of human life on Earth has been the historical equivalent of a nap on a sunny summer afternoon in a hammock with a jar of something nice and the flies buzzing. We enjoyed hundreds of thousands of years of noodling around in Africa before someone invented the stone hand axe. Was it the stone hand axe that propelled us on our sudden diaspora (really, according to archaeologists, it was sudden, and surprisingly quick for people on foot)? Have hand axe, will travel. In a cave near Pretoria, someone said, “Hey, let’s go to Australia next week. Pack your hand axe.”

Hand axe, hegira, then a few thousand years of ‘zzzing’ in the hammock again, painting pictures in caves, before someone invented agriculture, the wheel, and almost at the same moment, writing, double-entry accounting, and history. One can feel the current of history accelerating, the busyness of life accumulating a momentum that presses against the individual (trying to nap in the hammock). Civilizations start their vertiginous rise and fall. The rowdy backwoods captains of Macedonia invent the phalanx, and within years they have conquered the world. Only to fall away like the tide.

Rome rose and fell. We managed a bit of a nap through the Dark Ages during the long reorganization of Europe and the Black Death (meanwhile, Islam is racing ahead – the river metaphor seems always apposite, with its currents, rapids, eddies, whirlpools, rocks and hidden hazards). Then came the Industrial Revolution. We’re still experiencing the recoil of that slingshot event – aside from Japan, the Industrial Revolution only reached Asia after WW2, and the Middle East and Africa hardly at all.

Sometimes the vectors of history converge on a single unpredictable moment, after which everything changes: the fall of the Berlin Wall, the collapse of the World Trade Center towers, the Arab Spring.

Common sense and our own experience of time – the slow time of a summer day, and the frenetic upheavals of epochal events or technological advance – inform us that history possesses a mysterious rhythm over which we have at best the kind of control enjoyed by passengers on a runaway train (as long as they don’t try to get off or change direction, they are marginally okay). But common sense is sometimes a terrible judge (think: the Flat Earth theory). And history has this annoying opacity: at best, it becomes marginally intelligible only long after the fact. The current may be against us, and the accelerating thrum of history may just be the rumble of the bulldozers as they push the dirt over our graves.

The Individuals and the Anonymous
DOUGLAS GLOVER June 17, 2013 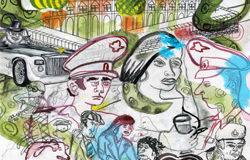