The Very Real Prospect of Genocide in Burma

The Very Real Prospect of Genocide in Burma

These are troubled times, for everywhere we turn it seems another crisis is erupting or escalating. The Central African Republic (CAR) has descended into lawlessness and chaos, with ghastly violence raging on between Christians and Muslims. South Sudan’s ceasefire exists only on paper, as clashes continue in areas such as Upper Nile state. And Syria remains hell on earth, particularly for children of whom millions are suffering unimaginable trauma.

This state of affairs reflects the ongoing failure of the international community to take early preventive action even when presented with clear warning of looming mass atrocities. As a result, crises turn into catastrophes and it quickly becomes far more costly to fulfill our obligations under the Responsibility to Protect. For instance, as we speak, the Security Council is agonizing over how it will resource the robust UN peacekeeping mission required to re-establish security in the CAR when preventive action prior to March 2013 — such as boosting the capacity of the BINUCA peacebuilding office, promoting youth education or enforcing an arms embargo — would have cost hundreds of millions less.

So as we continue to try and address the catastrophes of today, we must also recognize that we have a distinct opportunity, right now, to prevent those of tomorrow, starting in Burma where a potential genocide is quietly brewing.

Despite being an 800,000-strong Muslim community, the Rohingya, largely situated in Burma’s Rakhine state, are not recognized as one of the country’s 135 ethnic groups, having been denied citizenship under law since 1982. According to the UN, they are one of the most persecuted minorities in the world and were described by the BBC’s Mark Dummett as “among the world’s least wanted.”

The warning signs preceding genocide in this case are ever present. The Rohingya have often been referred to as “illegal Bengalis”, with some of Burma’s Buddhists demanding that they ‘go back to where they belong’, be it in Bangladesh or elsewhere. Generally they are forbidden from owning land, from inter-marrying with Buddhists and from having more than two children. Worse, Buddhist political and religious leaders routinely single out the Rohingya in hate speech and extremist literature, including Rohingya Hoax, by Maung Thahla, and Influx Viruses: The Illegal Muslims in Arakan, by U Shw zan and Dr. Aye Chan. But perhaps none speak more hate than prominent radical Buddhist leader Ashin Wirathu who has long accused the Rohingya of plotting to Islamize Burma.

Such hatred translated into significant acts of violence in June 2012 after three Muslims were accused of raping a Buddhist woman. When the dust settled, nearly 100 people had been murdered and over 90,000 displaced, mostly Muslims; their homes burned, looted and destroyed. The next month, President Thein Sein told the UN High Commissioner for Refugees that the Rohingya are “not our ethnicity” and that they should be resettled in other countries that are “willing to take them.” In March 2013, more violence between Buddhists and Muslims prompted Adama Dieng, the UN Special Adviser on the Prevention of Genocide, to sound the alarm on the situation, but the violence and persecution continued. This past January, interreligious clashes and the killing of a police sergeant resulted in the massacre of at least 40 Rohingya men, women and children at the hands of local Buddhists and police.

Today, the plight of the Rohingya is as precarious as ever. Some have chosen to flee the country, often by boat, but this presents other dangers. As the New York Times reported, since June 2012, over 2,000 have gone missing at sea, presumed drowned, while others routinely end up in the hands of human traffickers. Of those that remain, thousands are confined to camps, with authorities preventing them from leaving. And on February 27, the Rohingya’s lone health care provider, Médecins Sans Frontières, was expelled from Rakhine state by the order of the Burmese government, a move which has since reportedly caused the death of an estimated 150 people, including pregnant women.

All the while, a growing number of countries have recognized, and at times praised, Burma’s attempts to introduce openness and democratic reform; however, this only enables the government to demonstrate its indifference towards minorities. In its recent ‘investigation’ into the January 2014 massacre, authorities somehow concluded that no one had even been killed.

First, all political and economic engagement with the Burmese government should be conditioned on the Rohingya being granted full citizenship rights and on the promise of accountability for those, including the Burmese security forces, that are responsible for rape, torture and murder, among other crimes. Toward such ends, US sanctions against Burma, set to expire in May 2014, should also be extended.

Second, the Security Council should immediately authorize the deployment of international police units to Rakhine and other areas to help maintain security, end the culture of impunity and provide training to local police and security personnel.

Third, states should invest in third-party mediation as well as NGO-led interfaith dialogue and reconciliation programming at the local level, especially in Rakhine. One inexpensive but effective example would be to fund radio broadcasts designed to dispel myths, promote peace and condemn hate speech. And should the Burmese government be unwilling to grant access, the Security Council should demand it.

While Burma has yet to experience mass killing on the kind of scale witnessed in Rwanda or Darfur, the road ahead seems just as ominous. In the words of Professor William Schabas, former president of the International Association of Genocide Scholars: “When you see measures preventing births, trying to deny the identity of the people, hoping to see that they eventually no longer exist; denying their history, denying the legitimacy of their right to live where they live, these are all warning signs that mean it’s not frivolous to envisage the use of the term genocide.” And knowing that in the case of Burma should give us all the necessary motivation to prevent it.

With contributions from Jonah Kanter, project officer for human rights and genocide prevention in the office of Roméo Dallaire 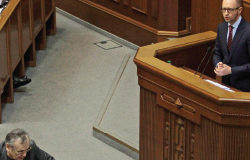