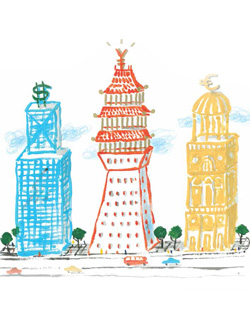 Despite the differences between US, Canadian and European business values, objectives and practices, and despite European publicly traded companies having pursued more of a stakeholder than an American-style shareholder orientation, one can certainly see similarities between this collective ‘West’ and Asia in respect of board governance, management principles, accounting and financial procedures, as well as marketing, operations and human resource strategies. Both Asia and the West have a healthy suspicion of the conglomerate/multi-industry model of business organization, a respect for the theory and practice of good management, a growing awareness of the importance of branding and marketing, and a focus on short-term efficiency and results – sometimes at the expense of longer-term effectiveness.

Of course, as with Western business, one cannot legitimately talk about ‘Asian business’ as a uniformity. There are huge differences between Japanese beliefs and models of business – with their focus on large, networked private sector organizations stressing organic growth, lower and short-term financial return expectations – and other ‘Asian’ styles. The contrasts with Chinese styles are particularly stark. Chinese private sector businesses are mostly family-owned rather than publicly traded, and Chinese state-owned enterprises are most often bureaucratic models that Max Weber would have recognized from his work in 19th century Europe. While these state organizations are undergoing massive changes as they move out beyond Chinese borders, they are still lacking in the flexibility and agility so needed in free market competition, as well as in some of the risk management and marketing skills so pronounced in the West.

A further contrast in Asia lies with Indian businesses, which, despite obstructive government bureaucracies, have shown themselves to be entrepreneurial not only in small- and medium-sized enterprises, but also in large organizations like Aditya Birla Group, Infosys, Tata, Wipro and so on. Indian styles of management have levered much from the West, all the while remaining uniquely Indian and entrepreneurial – for one thing, making extensive use of branding and marketing. While they have still much to learn in respect of employee engagement and financial management, these Indian organizations are increasingly impressive competitors on the world stage.

We do not have the space to discuss the success of the Korean chaebols, or Singaporean and Hong Kong family entrepreneurship, or the rise of the Indonesian networked businesses. But the point is that there is no single ‘Asian’ model.

» Alan Middleton is Executive Director of the Executive Education Centre, and Assistant Professor of Marketing at the Schulich School of Business, York University, Toronto.

Asian businesses are expanding and globalizing. Western businesses seem to be hesitant and defensive. I would like to say to the leaders of business in the West that they should speak up for globalization and free trade, and not give in to the protectionists and any rising tide of economic nationalism. An open and borderless world benefits everyone in the East as well as in the West.

» Tommy Koh is Singapore’s Ambassador-At-Large, Rector of Tembusu College, and Chairman of the Centre for International Law, National University of Singapore.

Many Asian economic practices are today still very much a reflection of family values deeply rooted in Asian society, with honour being one of the abiding objectives of such practices. Western economic practices seem to be more pragmatic. If in the Western world the success of a business depends on factors like capital, meritocracy and hard work, Asian business success in many cases still hangs on lineage, capital, political connections and, lastly, meritocracy.

Asia and the West have become mirror images of one another, betraying a global imbalance that must be redressed if the global economy is to get going once again. Asia has growth, the West stagnates. Asia has become largely dependent on Western consumption. The West, in turn, is largely dependent on Asian savings. This model of development and growth is no longer sustainable.

Asians have to deprive the West of their savings and start consuming domestically. Asia’s emerging middle class wants this and deserves it. The West, for its part, has to consume less and save more.

All of this is beginning to occur – that is, a new pattern is emerging. But governments must bravely adopt policies that will deepen and accelerate this global rebalancing.

“Key question for the next US President…
STABILE, FITZPATRICK ET AL. October 4, 2012