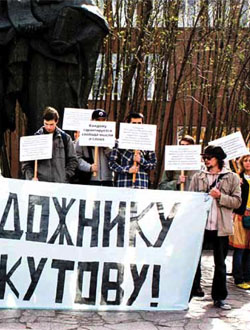 Autocracy is passé. The future is idée fixe. Leonid Kosals reports from Moscow

Artem Loskutov, a young artist, was imprisoned this past May. He spent nearly a month in a pre-trial Russian prison. His criminal trial is now under way. Mr. Loskutov is the leader of ‘Monstration,’ a popular countercultural carnival procession, known for its absurd, satirical slogans, that marches annually on May 1 in Novosibirsk, Siberia’s largest city, alongside traditional demonstrations by Communists and the state authorities. Last May was the sixth annual ‘Monstration.’

Igor Groshev, a former professor in Tyumen (also in Sibera), was convicted because he had allegedly damaged his university’s reputation. He had conducted a sociological survey among students that revealed that 44 percent had often been forced to pay bribes to educators during their university career. The head of the university in question did not stop the corruption, but instead filed an action again Mr. Groshev. Groshev was forced to put a disclaimer on the survey, pending a review of its ‘methodological correctness’ by the Russian Academy of Sciences.

Despite their many distinctions, both cases represent a system of ‘ideocratic’ control that has emerged in Russia over the last decade. The first exercise of such control was in realm of the media: Russian TV and newspapers were captured by the state authorities just as this new century began. This capture provided the springboard for mass state propaganda focussing on several easy doctrines: in particular, that Russia has many enemies (the US above all others, and the West in general); that to defend the country, it is necessary to restore great power influence on some of the former Soviet republics, themselves generally seen as organically part of an historical ‘Extended Russia’; and that state leadership in the economy and in politics is an essential feature of Russia’s uniqueness, and indeed a key ingredient in the provision of national stability and prosperity. All this led to accelerated changes in public opinion: in 1994, 41 percent of Russians thought that Russia had external enemies, whereas 22 percent had asserted that it did not. By 2008, the respective tallies were 68 and 14 percent.

The creation of Russia’s ideocratic state institutions has been gradual. A body of special laws has been accepted by a largely controlled Duma (the national parliament), including the 2006 Law on Counteraction of Extremist Activities. A broad spectrum of tools allows for relatively soft Russian (as compared with the harder Chinese) state ideological control over the Russian sector of the Internet. This spectrum of tools includes the opening of criminal cases against some bloggers on charges of extremism or abuse of the police, promotion of pro-government propaganda websites (such as www.russia.ru), as well as the planting of anonymous people to push ‘state interests’ in Internet chat rooms.

Many public fears have resulted from state ideological activities in the realm of the teaching and interpretation of Russian history. A bill seeking to counter the rehabilitation of Nazism in the former Soviet republics was passed by the Duma. Then a decree by President Medvedev stood up a special commission to correct historical “falsifications damaging Russia’s interests.” The commission’s head is the head of the Presidential Administration, and the commission’s members include the Director of the Foreign Intelligence Services, the head of the Department of Federal Security Services, and so on. “Who will defend national Russian interests in the European history? And how?” the commission asks. It plans to fight against attempts to minimize Russia’s role in WW2, among other historical events. Indeed, a controversial recent article inspired by this commission charged Poland with responsibility for having started WW2, arguing that it had rejected ‘moderate’ German demands. The article was only removed from the website of the Russian Ministry of Defence after significant protests by Russian academics.

Formal ideocratic control by the state is supplemented by informal dimensions, including unconventional violence – sometimes at the hands of pro-Kremlin youth movements – against people out-of-step with official lines. And domestic or internal ideological control is supplemented by foreign propaganda. The Commission on Forming Russia’s International Image is headed by S. Naryshkin, the author of the aforementioned notorious article.

This new ideocratic system has some similarities with, and distinctions from, the old Soviet ideological practices. The two systems have in common their significant control over, and manipulation of, the minds of the Russian citizenry. The emergence of autonomous powerful actors in every sector – the media, education, culture, science – is blocked. However, today’s ideocratic controls are influenced more by the economic interests of certain groups within the Russian state, rather than the Marxism of the Soviet state (see the Groshev case).

Still, the new ideocracy of Russia is compromised by the very vagueness of the system’s goals, and by the absence of attractive ends. And yet, the Kremlin has in its arsenal powerful arms for enforcing this ideocracy. These may at some point beget other kinds of weapons – ones that will not be allowed to rust for very long.

Leonid Kosals is a professor in Moscow’s Higher School of Economics, having also worked for many years in association with the Russian Academy of Sciences in Novosobirsk and Moscow.

Are There Any Bismarcks in the House?
MOSHE A. MILEVSKY November 1, 2009