Final Meditations on the Wheel & Deal

Final Meditations on the Wheel & Deal

A deal is not the ideal. We have some history in the Bible. Eve breaks a real estate agreement with God in the early chapters. Then there is that sharpish episode with Jacob and his brother Esau over birthright and inheritance. And Jacob was followed by Bernie Madoff – no, sorry, he comes later. We call people who sell illicit drugs on street corners ‘dealers.’ ‘Pork’ is the unsavoury little word used in America to describe lucrative (and often seriously tangential) side deals included in legislation to ensure its passage in Congress. There is also double-dealing, doublecrossing, dirty-dealing, fraud, AIG and mortgage derivatives – all bad, bad words associated with deals. Politicians and Wall Street traders and investment bankers all make their livings doing deals. We tend not to trust them, tolerate them at best – especially these days. A deal is not the ideal. In a perfect world, in heaven, where angels speak and everything is understood, there is no call for deals. Deals flourish under the sign of Babel and the category of time. They share the essential ambiguity of language and human nature: we try to be good, but have an unfortunate capacity for dishonesty, greed and an unhealthy will to power. Yet we live in a sea of ambiguity; it is impossible to function without it. George W. Bush, a Puritan and a fundamentalist in more ways than one, was afraid of ambiguity and refused to negotiate with Iran. In fact, he refused to negotiate with almost anyone except, oddly enough, North Korea. Barack Obama, in contrast, campaigned on the idea that he would negotiate with anyone, assuming, one guesses, that diplomacy is cheaper and less messy than Shock and Awe. One notices that the American press is suspicious of his trust in words, in negotiation, in making deals. Politicians are politicians, and we often disparage them for being good at the essentials of their craft – compromise, consensus and deal-making. But if you combine these with vision, a certain savoir-faire, elegance, a nice suit and an appropriate stage, you become a statesman. One man’s pork-barrel politics is another man’s Nobel Prize. Blessed are the peacemakers and the few banks still willing to lend money, for they shall move us forward into the Promised Land or – dare we hope – another bull market. History is a wrecking yard of botched deals, yes. A deal is not the ideal. But deals are the gears of exchange: they make things work, they propel us into a future, willy-nilly, sanguine or otherwise. A good deal is a moment of clarity, of sudden understanding, of practical adjustment: one absolutely fascinating element of deal-making is the negotiation of functional equivalents between apparently incommensurable entities. There is art and elegance here, along with the ambiguity and the ever-present possibility that the guy you are talking to is a crook. Deals create their own hermeneutics, their own systems of definition, interpretation and appeal. They also create their own shadowy quasi-legal systems. Indeed, one of the prickliest elements of large-scale international deal-making is the procedure for inventing a high power (now that God and the gold standard have failed us) – a court of appeal, as it were, that supersedes the legal power of sovereign nations which recognize no power higher than their own. At a certain point, there are deals that seem to defy the law of gravity – floating in space above and between nations (and the UN). That hissing you hear late at night when the traffic dies down is the sound of money escaping from the credit default swaps market – a brilliantly nimble Dadaist system of deals that flourished briefly between common sense, greed and so-called worldwide securities regulations. Which is all to say, in the end, that the deal sits at the centre of everything that makes us human, at the centre of politics, business, criminality and love – for what is love but a deal between two hearts, a matter of trust, translation and a set of pragmatic equivalents?

Douglas Glover is a Governor-General’s Award-winning novelist and short story writer. His last book was an extended essay on Cervantes and Don Quixote. 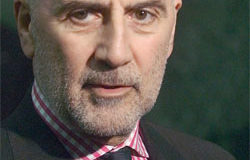 Scanning the Globe for Deals
INTERVIEW WITH ALVARO DE SOTO May 13, 2009