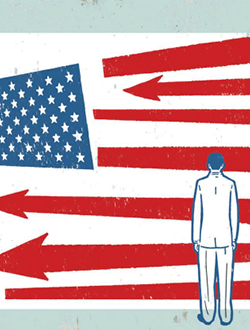 Emerging from a deep recession in 2018-2019, the country will seek to rebuild its diplomatic, economic, cultural, and especially military presence across the globe. Washington’s key partners will be somewhat different from earlier years: Berlin, New Delhi, Beijing and Tehran.

…will look to restore the relationships and institutions weakened during the 2016 wave of global populism. Emerging from a deep recession in 2018-2019, the country will seek to rebuild its diplomatic, economic, cultural, and especially military presence across the globe. Washington’s key partners will be somewhat different from earlier years: Berlin, New Delhi, Beijing and Tehran. Experiencing further moves toward democratization and open market activities, Iran will become, once again, a key US partner in the Middle East. The precipitous decline in the Russian economy and population will make Moscow a second-rate actor behind these growing powers.

The region of greatest new opportunity and challenge in 2020 will be the Arctic, where melting ice has opened up major trade routes and spurred energy exploration. The US will work closely with Canada and Norway to restrict Russian claims and protect an ‘open seas’ area. Of course, the US will expect special privileges for commercial and military shipping, causing recurring conflicts with Ottawa and Oslo. The opening of the Arctic will raise new insecurities, but it will contribute to economic growth and cooperation – especially between Canada and the US.

For the first time, in 2020, Americans will begin to give climate change top priority in their foreign policy deliberations. Rising sea levels will trigger coastal flooding around Miami, San Diego and New York. Rising temperatures will reduce crop yields from Midwestern farmers. Following a series of extreme weather events, with numerous deaths, the US government will finally move toward a carbon tax, advocacy for international environmental treaties, and cooperative remediation among the largest countries. The third decade of the 21st century will be the greenest decade, in aspiration, in American history.”

» Jeremi Suri is the Mack Brown Distinguished Chair for Leadership in Global Affairs at the University of Texas at Austin, where he is also a professor in the Department of History and the Lyndon B. Johnson School of Public Affairs.

…will in all probability still be reckoning with the fact that its economic and social problems will not have been solved in the context of the right-wing, populist agenda. This will lead to a political crisis in which the left will seek to exact a decisive revenge for its collapse in the fall of 2016 – something that will likely intensify or otherwise reinforce the fast-growing polarization of American society, and impose even greater stress on the country’s norms and institutions.

In any case, even if the protectionism of Trump may lead to short-term benefits for his supporters, we can expect further long-term weakening of American global dominance. Against this background, Europe and the UK (post-Brexit) face the challenge of fundamentally reviewing the principles of their politics and geopolitics – principles that have endured for the last 70 years. Post-WW2 Europe – to begin with, Western Europe, and then post-Cold War Europe, including its Eastern parts – focussed on the partnership with, and the support of, the US as the main liberal force in the world, able to support global democratic trends and insure all of Europe against possible counter-trends or tendencies, as well as against external aggression.

It is increasingly apparent that this 70-year period is ending – and not only because of the recent pronouncements of President Trump in respect of the funding of NATO. As such, it will be essential for Europe to find non-standard, effective approaches and answers to its evolving challenges without compromising European identity and values. If it did so in fashioning the Westphalian consensus for the early modern international order, then I am reasonably optimistic that Europe can strategically adapt to the pressures of the first half of the 21st century.

Ideological flexibility, pragmatism and a deep appreciation of Europe’s interdependence with its neighbours can help to restore both the internal balance of European society and the strategic legitimacy of the continent on the basis of strengthened internal institutions and a multi-vector foreign policy. To be sure, the most promising foreign policy vector involves the development of a strategic partnership between the EU and China – up to and including a possible Sino-European association agreement. Of course, other powerful international players could try to spoil such closer ties. To this end, the biggest threat to Europe comes from Russia and the Middle East. The future of Europe is largely dependent on the ability to resist this threat in the context of the weakening participation of its strategic ally in Washington.

In the medium term, Russia promises to be stable and boring. This is the unified current view of experts inside Russia. In the opinion of many of these same experts, Russia may well have strengthened its positions in recent years specifically because it did not receive a contrary response or rebuff from the Western alliance. However, it is absolutely clear that this strengthening carries with it significant limitations – especially in the long term, and specifically in strategic terms. Indeed, the principal problem remains the dependence of the Russian economy and the state budget on world oil prices. (This problem is unlikely to be addressed persuasively, in the foreseeable future, by the Russian government acting on its own.) As long as fortune favours the government, Moscow can keep the domestic and international situation under control. However, this picture can change at any moment, including by the end of the current decade. Such surprises or shocks in Russia are always very sharp and sudden, and no one in Russia believes that they will occur until they actually materialize. Bref, the Russian political system is still properly characterized by weak institutions and a values vacuum, which makes it inherently unstable.

The protracted and expensive conflicts in neighbouring Ukraine and in the Middle East show both the reach and the limits of Russian power. Still, excessive weakness in the Russian state and, worse still, any future disintegration of the Russian state, à la USSR, would fatally contradict the basic interest of most reasonable people in global stability, even if such a scenario would accelerate and consolidate the rise of China to the centre of global affairs. Understanding this potential future – one quite self-evident in the context of classical balance-of-power frameworks – could well motivate the leadership of the US and its allies to support the status quo in Western Europe and a continuation, to a limited extent, of sectoral partnerships with Moscow. Such partnerships will be essential in order that Russia remain stable and predictable as a great power this century.”

» Vasily Zharkov is Head of the Department of Political Science in the Moscow School of Social and Economic Sciences.

On the State and Future of US Politics

Whither the US Over the Next 5 Years?