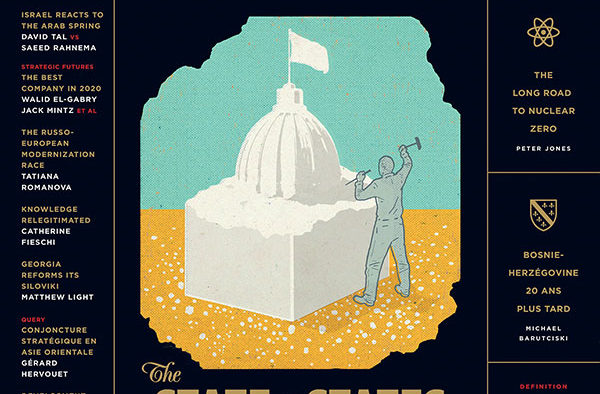 The State is Back, Big Time. But Just What Kind of State?

The first decade-plus of this new century has seen ample evidence of the return of the State, classical and other. From national security to monetary (Euro) and fiscal (bailout) policy, to the ‘power vertical’ of Asia’s most important country, China, the times will continue to be defined by what happens within states and between them. Within states, this may well mean democracy where possible, but not necessarily democracy (or perfect democracy), while between states, we ought to hope it necessarily means no (or little) war, and peace (or perfect peace) where possible. This is a minimalist’s humble read of what promises to be an increasingly complicated chessboard of state identities, interests and decisions.

To be sure, international institutions, NGOs, companies and individuals – ordinary and heroic alike – and various ‘networks’ will continue to influence the course of world affairs, but talk of the demise of the state is, as was mooted in GB’s last issue, cheap. The state lives, and lives well – even if it is undergoing significant changes in constitution, vocation, narrative and capabilities. This is not to undersell the importance of the ‘agents’ of the state – its leaders – who will impose themselves on its future, for better or worse. Indeed, as the state resurges and changes, so too do the characteristics of those who will head it, defend it, cultivate it, and civilize it. And so the story of the 21st century state – and this Spring/Summer 2012 issue of GB – is as much about hyper-modern statesmen and stateswomen (what do they look like, how do they think?) as it is about hyper-modern states and statecraft.

Dan Vexler of CARE UK kicks off the issue in the One Pager by explaining the historical shift in focus in the development field from state-wide metrics of material well-being to intra-state metrics that show growing disparities in income levels within states that are otherwise becoming increasingly wealthy. Jeremi Suri of the University of Texas at Austin offers an aggressive defence of the state, its mission and its future (and the need for a new class of heads of states) in our opening Feature. GB’s Editor-in-Chief and Publisher Irvin Studin then argues that Canada’s grand strategy for this century has four key ‘relationship’ vectors, summarized in the acronym ACRE: America, China, Russia and Europe; the rest, strategically speaking, is commentary. The University of Ottawa’s Peter Jones shows that – barring conflict in certain theatres – international political and fiscal winds may be conspiring in favour of a credible, global ‘nuclear zero’ push. Tatiana Romanova of St. Petersburg State University shows that Russia and the EU are involved in an undeclared, long-term ‘modernization race’ – or a competition between modernization concepts – that may well lead the sides to a common outcome. Finally, GB’s Associate Editor Michael Barutciski revisits the Yugoslav war – 20 years after Bosnia-Herzegovina’s independence – in order to show how limited knowledge and strategic hubris made for a flawed Western intervention, the consequences of which are still felt in the region, and ought to be understood by today’s analysts and those who champion the Responsibility to Protect (R2P) doctrine.

In Tête à Tête, GB speaks with two major past foreign ministers – first with France’s Hubert Védrine about the future of the EU and France’s read of global politics. Lloyd Axworthy, former Canadian foreign minister, demonstrates that military intervention is but the most extreme form of R2P intervention (and that diplomatic and political intervention is often prior and ought to be privileged), and that all forms of intervention carry with them grave duties for intervening parties. In Query, Catherine Fieschi of the UK think-tank Counterpoint assesses the state, legitimacy and need for relegitimation of ‘official’ knowledge, while Laval University’s Gérard Hervouet treats the connections between regional security and domestic politics in East Asia. In Nez à Nez, David Tal of the University of Calgary debates York University’s Saeed Rahnema on whether, on balance, the Arab Spring poses a strategic threat to Israel. In The Definition, we ask whether the future of the states system would be less violent with women in charge: Fatou Bensouda, Prosecutor-Elect of the International Criminal Court, UN High Commissioner for Human Rights Navanethem Pillay, and Maryna Bilynska of Ukraine’s National Academy of Public Administration weigh in. In Strategic Futures, World Economic Forum Managing Director Robert Greenhill, Edward Waitzer of the Schulich School of Business, and Jack Mintz of the University of Calgary’s School of Public Policy tell us what will be the world’s most important company in 2020. In Situ reports come to us from Irvin Studin in Montreal, where the ‘Strategic Constitution’ is the rage; and from Matthew Light in Tbilisi, Georgia, where the government has tamed that country’s notorious siloviki. GB visits the Cabinet Room of Alexander Lukashenko in Belarus. Douglas Glover sends us into the summer heat in Epigram.