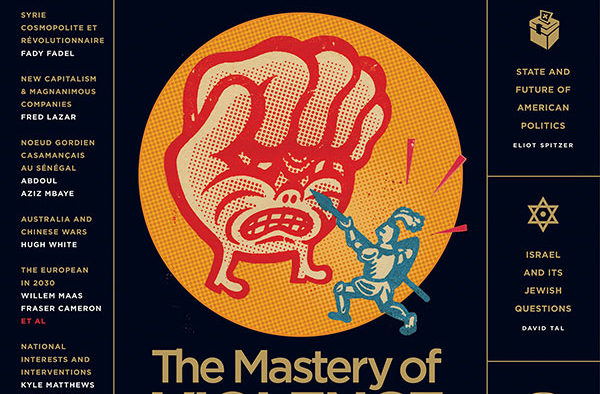 The potentially explosive paradox of our growing civility

The expansion of modern civilization, education, culture, government and public institutions may well have lent itself to the happy conclusion that we live in the most peaceful of times. Proliferating mass and social media may suggest otherwise, but the long-term trend is definitively one of diminishing violence. This is a fact.

Still, the very same advances that have allowed us to ‘master’ the brutality of which we are so eminently capable – witness the cataclysms of the last century – are manifestly at play among political actors – big and small alike – who wish to use brutal means to realize any number of imaginative purposes. And so we come to a major paradox of the modern strategic condition: civilization has tamed man (and his violence), and at once made civilized (disciplined) man more capable than ever of vaulting destruction. This vaulting destruction will of necessity issue less from a general anarchy than from a combination of precision-weaponry, geopolitical calculus and clinical ruthlessness.

This Fall 2011 issue of GB is built on three ‘images’ of violence mastered: violence mastered by civilized or civilizing forces (the good story); violent methods mastered (used) in ultra-modern ways to advance 21st-century objectives (perhaps the less good story); and, finally, on this 10th anniversary of the ‘Responsibility to Protect’ (R2P) doctrine, violent methods – advanced methods – used to tame, suppress or reverse other violent methods in order to restore civilization (still a decidedly grey story).

George Anderson, President Emeritus of the Forum of Federations, sets the tone of the number by projecting the future of federations and the necessary devolution that awaits new democracies (or democratizing states). Michael Cotey Morgan of the University of Toronto holds the pen in our first Feature, arguing that humanitarian interventions of the R2P mould – whether successful or not – are invariably tragic. American strategic analyst Daveed Gartenstein-Ross discusses terrorism futures, positing three key forces – austerity, resource scarcity and technology – as driving a very precarious next decade in international affairs. The University of Calgary’s David Tal argues that the recent Jewish protests in Israel betray a maturing national project that is no longer in need of a big, unifying idea. Richard Rousseau of Azerbaijan’s Khazar University profiles the continuing disintegration of the old Soviet space, and predicts the near-term dissolution of the Russia-dominated Commonwealth of Independent States. And finally, Fred Lazar of the Schulich School of Business makes the case for a strong government role in shaping the behaviour – even sometimes pushing magnanimity – of ‘new capitalist’ companies within and across borders.

In Tête à Tête, GB picks the brain of Harvard’s Steven Pinker on the long-run diminution of micro- and macro-violence in the world. Eliot Spitzer, former New York governor, assesses the curious state and fate of American politics as the 2012 presidential election nears. In Query, Singapore’s Arabinda Acharya and Canada’s Tom Quiggin divine the future of terrorism in Southeast Asia. And Fady Fadel of Lebanon’s Université Antonine parses the idiosyncrasies of Syria’s majority-minority dynamics as that country’s internal crisis sharpens. In Nez à Nez, Kyle Matthews of the Montreal Institute for Genocide and Human Rights Studies debates Wolfgang Krieger of Marburg University (Germany) on whether national interests corrupt humanitarian interventions. In The Definition, we ask the University of Denver’s Nader Hashemi, Nanyang Technological University’s Rebecca Lunnon and others about the principal near-term consequences of the Arab Spring. The European as he or she will be and ‘look’ in 2030 – presumably after the current string of crises – is our subject of interest in Strategic Futures: Fraser Cameron of the EU-Russia Centre in Brussels, Willem Mass of Glendon College, and several others oblige us. In Situ reports come to us from Dakar, Senegal, where the Casamance problem crescendoes; and from Canberra, Australia, where Australia plays for a ‘Concert of Asia,’ but steadfastly recuses itself from any role in a possible US-China war. GB visits Argentina’s Cabinet Room to see how that country is preparing to profit in the Falklands after recent reports of growing British military weakness. Douglas Glover takes us home again in Epigram.