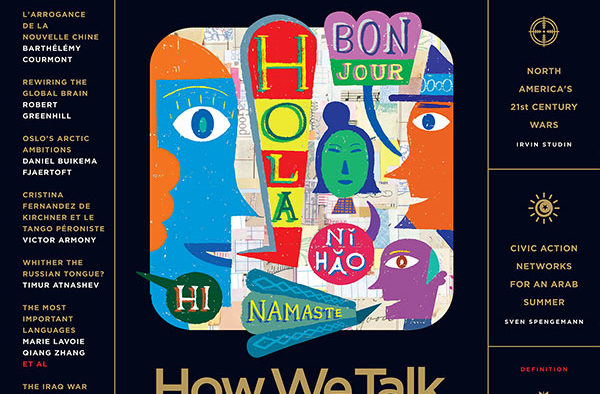 Sticks and Stones in a Virtual Universe

What’s in a word when there are so many out there?

Words matter. Revolutions – major revolutions – have been launched over, and through, words. In our age of rolling revolutions, we forget that the Russian Revolution – the most important revolution of the last century – had some roots in an original argument about, yes, words: editorial policy, to be precise. Lenin and the Bolsheviks (those in the majority) broke with Martov and the Mensheviks (those in the minority) in part over editorial policy relating to the Russian-language Marxist newspaper Iskra (‘Spark’). The Bolsheviks ultimately won the debate, and wrested control over not just the medium and the message, but also the means of production and, indeed, coercion in the entire Russian Empire – and then some. The rest, as they say, is history.

This Spring/Summer issue of GB sees us examine where the world is headed in this hyper-modern age of multilingualism (the EU, after all, operates in 23 languages), social media and intense international and inter-generational debates about the character of the ‘good life.’ In this new century, this ‘good life’ has many spokespeople (too many?), subtexts and trap-doors. There is no manifest destiny; only continuous argument – followed, hopefully, by better argument still.

Robert Greenhill, Managing Director of the World Economic Forum, starts things off by exploring the ways in which top decision-makers package ideas and divide labour in order to digest increasingly complex ideas across a multitude of fields. In our first Feature, Jeremi Suri of the University of Texas at Austin argues for the continued relevance of the diplomat – and of her education – in a world of constant communications revolutions. GB Editor-in-Chief Irvin Studin makes the case that, while the 20th century was a geopolitically lucky and exceptional one for North America, the 21st century will herald more ‘historical’ dynamics in the form of bona fide warfare – including land warfare – on the world’s luckiest continent. New York University’s Patricio Navia explains why Spanish – yes, Spanish – is set to become (or return as) the language of ‘new elites’ in Latin America. Barthélémy Courmont of South Korea’s Hallym University describes the genesis and consequences of China’s growing geopolitical arrogance. And in our final Feature, Sven Spengemann, on sabbatical from the UN Assistance Mission for Iraq (UNAMI), posits that the future of Middle East democracy – in form and content – lies with the strategy and sophistication – and, to be sure, continued ‘spark’ – of the civic action networks that have been at the heart of the recent revolutionary action in the region.

In Tête à Tête, GB speaks with Conrad Black – polymath, newspaper baron and man of letters – about the future of the printed word and the explosion of social networking. John Ralston Saul, International President of PEN International, assesses the partly depressed, partly confused state of modern political rhetoric. In Query, Timur Atnashev of Moscow’s Presidential Academy of Public Administration and Economics distills the forward trend lines for the Russian language. And the University of Sherbrooke’s Sami Aoun wagers that, on the balance of probabilities, the Assad regime in Damascus will survive. Shuvaloy Majumdar of the University of British Columbia’s Liu Institute and Peter Jones of the University of Ottawa go Nez à Nez on the causes of the Arab Spring – to wit, did the Iraq war (launched in 2003) not play some material role? In The Definition, we ask former Australian foreign minister Gareth Evans, St. Petersburg State University’s Tatiana Romanova, Princeton’s Richard Falk and others to tell us when humanitarian intervention – of Libyan or other ilk – is justified. More plainly, we enquire – with GB’s own Marie Lavoie, the BBC’s Qiang Zhang and others – into the key languages of the next 100 years in Strategic Futures. In Situ reports come to us from Oslo, Norway, where the Viking state is slowly but surely positioning itself for victory in the Arctic; and from Buenos Aires, Argentina, where President Cristina Fernandez de Kirchner manages the intrigues of her court, party and country, while eyeing re-election in the coming months. In the wake of the killing of Osama bin Laden in Pakistan, GB visits India’s Cabinet Room to gauge reactions from the Singh government. Douglas Glover closes our book in Epigram.