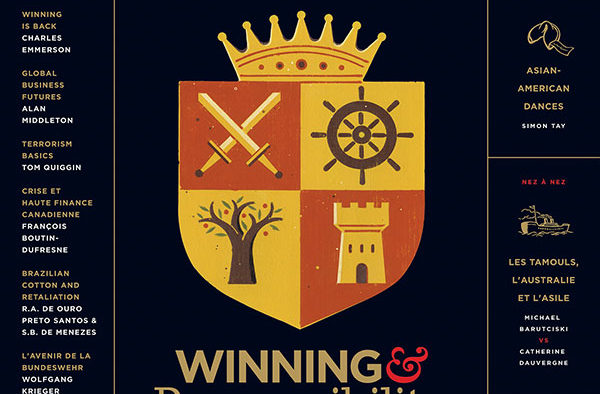 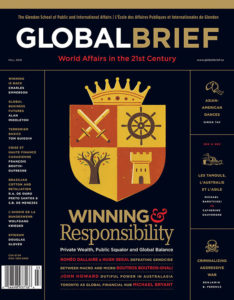 Winning is Back With a Vengeance

Only now, winners and losers alike must share the same globalized world

GB enters its second year exploring the poetic tension between the resurgent imperative to win (prevail, dominate, crush) in international affairs and global, new-century pressures to preserve and promote the more general good. A state seeks strategic advantage over other states, but must otherwise protect – practically speaking – the ever complex international order that serves its daily bread. A 21st century company seeks to outdo its competitors, but cannot – legally speaking – take such risks as to imperil the health of the hyper-integrated economy that is its competitive theatre. A cultural or national group seeks to monopolize ‘scarce resources’ at the expense of minority groups, but cannot – morally speaking – act to annihilate these weaker groups. In short, winning now has context – and that context is modern responsibility.

Winning without responsibility is nihilism. Consider Pakistan, post-floods. It is losing badly, on countless fronts – meaning that many other countries may seem to be ‘winning.’ But the winners will the total loss of Pakistan at their peril, as well as that of the general international system. Or consider the Arctic. Both the US (although distracted by mid-term elections) and Russia could win wars to claim the contested wealth of this newly important region, but both (Putin most recently) have prudently declared themselves to be committed, along with Canada, Norway and Denmark, to averting any armed conflict through the UN Convention on the Law of the Sea claims process. Armed conflict over Arctic resources and sovereignty might still occur in this new century, but not without all parties being alive to the costs to the Northern biosphere and to international stability at large. Einstein: “I don’t know what kind of weapons will be used in the third world war […]. But I can tell you what the fourth world war will be fought with – stone clubs.”

Parts of this issue, and particularly the Nez à Nez debate between Glendon professor-cum-GB assistant editor Michael Barutciski and the University of British Columbia’s Catherine Dauvergne on the recent Tamil boat off of Vancouver Island and the Australian approach to asylum seekers, anticipate a wonderful fall conference, co-sponsored by the Trudeau Foundation, the École nationale d’administration publique and the Glendon Centre for Global Challenges. This conference, entitled Immigration and Pluralism: Trends, Options, Management, will be held in Quebec City on January 27th, 2011, and will explore, among other issues, the reconciliation of religious freedoms and common citizenship.

There may be no starker case study in winning-versus-responsibility than 21st century genocide. Some parties may ‘win’ in the context of a genocide (for instance, those that refuse to intervene in order to preserve advantage), but the new-century moral, legal and geopolitical pressures to stanch such mass murder surely operate as important counterweights. Canadian Senators Roméo Dallaire and Hugh Segal reflect on the defeat of genocide in our first Feature piece. (In our first Query, famed former Nuremberg prosecutor Benjamin B. Ferencz discusses the criminalization in international law of aggressive wars.) In our second Feature, Simon Tay, Chairman of the Singapore Institute of International Affairs, argues for a revitalization of the US-Asian strategic engagement that is so critical to world order. Charles Emmerson, former Associate Director of the World Economic Forum, adduces evidence for the case that international winning is indeed back, big-time, and problematically so. François Boutin-Dufresne, a Washington-based economist, explains how, post-economic crisis, Canada has an opportunity to become a haven for international ‘financial refugees.’ (In our second Query, former Ontario Attorney-General Michael Bryant makes the policy case for Toronto, post-G20, becoming a world-leading centre of finance.) Finally, terrorism specialist Tom Quiggin ties together the major summer terrorism arrests in Canada and other recent terrorism-related events to illustrate how terrorism, at its core, must be framed and addressed principally as part of the spectrum of activity that we may wish to call ‘political.’

In the One Pager, Alan Middleton of the Schulich School of Business assesses the trends and winners in global commerce one decade out. In Tête à Tête, former UN Secretary-General Boutros Boutros-Ghali and past Australian Prime Minister John Howard respectively decipher the winning-responsibility dyad for the world entire and for Australasia. In Situ reports come from Wolfgang Krieger in Berlin, where reform of the Bundeswehr is the order of the day; and from Sao Paolo, where Brazil, pace presidential elections, weighs a retaliatory move in its trade battle with the US over cotton. In The Definition, we ask leading thinkers what winning in international affairs really means in the 21st century. Potash Corporation oblige, Strategic Futures examines the most important natural resources in the year 2020. And GB is in New Zealand’s Cabinet Room, hot on the heels of the recent Canterbury earthquake. Douglas Glover closes things off in Epigram.