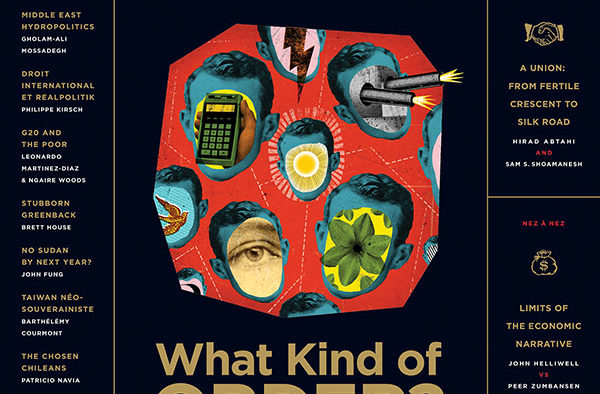 GB’s in The House

But What Kind of House is it?

First things first: an ambitious, new-century magazine can only flourish on the strength of great friends and heroic partners. Here’s to both in people like Kenneth McRoberts, principal of Glendon College, and Alex Himelfarb, director of the Glendon School of Public and International Affairs! GB is now beautifully ensconced at Glendon, publishing in print to a global readership in English and French, and in 10 languages online at www.globalbrief.ca.

This issue of GB hits newsstands just as Glendon’s new Centre for Global Challenges, in partnership with, among others, the Canadian Institute for Advanced Research, prepares its inaugural colloquium, scheduled for March 24th, entitled: “After the Meltdown: The Limits and Possibilities of Economics.” That colloquium will feature Nobel Prize-winning economist George Akerlof, the LSE’s Tim Besley and Canada’s Pierre Fortin challenging the adequacy of traditional economic paradigms for understanding and addressing this new century’s complex socioeconomic problems – or, in GB-speak, the coming order. The new Centre and GB happily share the objective of providing an important, interdisciplinary forum for leading and original thinkers, analysts and practitioners to discuss and debate the great issues that will shape our times – always with a view to translating reflection into meaningful action.

So what kind of order? Really. What will the world look like in 10 or 15 years through the overlapping lenses of politics, geopolitics, commerce, culture, religion – indeed, in all of the complex theatres of la comédie humaine? Surefire prediction is folly, but there is – dare we repeat the word – ‘culture’ in the attempt.

GB has been blessed in publishing some of the world’s most interesting thinkers. This issue is no exception. Columbia University and IMF economist Brett House starts us off in the One Pager, betting on the continued dominance of the US dollar over competing seductions like gold. In our first Tête à Tête, Philippe Kirsch, founding president of the International Criminal Court, peers into the future of international criminal justice, war and the international jurist’s delicate dance between black-letter law and the greater anarchy of transnational politics. Rock-star historian Margaret MacMillan, Warden of St. Antony’s College, Oxford, gives GB an intercontinental tour d’horizon of geopolitical futures in our second Tête à Tête. In our Features section, the Financial Times’ US managing editor Chrystia Freeland explains the paradoxical rise of this new century’s plutocratic class – this from a world that was supposed to be flat. Sam Sasan Shoamanesh, GB Managing Editor and co-founder, and Hirad Abtahi of the International Criminal Court, together make the highly vivid case for a grand political-economic-security union that would encapsulate the countries “from the Fertile Crescent to the Silk Road.” For his part, Jeremi Suri, one of the US’s top young political thinkers (and our newest GB Geo-Blogger), answers the very apposite question: where are the 21st century’s Kissingers? In other words, where does one find the new great ‘geocrats’ who inhabit the rarefied interstices between pure academe and brute geopolitical practice? Answer: many of them write for GB! Oxford’s Ngaire Woods and the Brookings Institution’s own Leonardo Martinez-Diaz wax sceptically on the emergence of the G20 as the newest in an increasingly indecipherable web of governance networks and institutions, wondering aloud whether this newest club will be able to deliver anything of moment for the planet’s perennially disadvantaged. Finally, Michael Byers, of the University of British Columbia, predicts anticlimax in the great Arctic endgame.

In Situ reports come to us from John Fung in Juba, Sudan, where a 2011 referendum threatens the continuity of the modern Sudanese state. Barthélémy Courmont (also a new GB Geo-Blogger, en français), writes from Taiwan on the ‘neo-sovereigntist’ waltz with a booming China. Patricio Navia is in Santiago, Chile, assessing the outcome of the recent Chilean presidential election and the curious, back-to-the-future rise of the ‘neo-Pinochet’ political set. And in Query, Gholam-Ali Mossadegh, great-grandson of the deposed former democratic leader of Iran, Dr. Mohammed Mossadegh, spells out the power plays brewing around water in the Middle East, while documentarist Alexandre Trudeau, son of the late Canadian prime minister, assesses the West’s ying-yang ‘asks’ on the Middle Kingdom. This issue’s Nez à Nez has Canadian political economist John Helliwell squaring off against Osgoode Hall Law School’s Peer Zumbansen on whether the international narrative of the next 10 years is manifestly economic. We then ask various thinkers, in The Definition, to ponder the future role of central banking – post-international financial crisis. Meantime, another team of star commentators tells us, in Strategic Futures, what Iran will look like 10 years hence. Finally, virtuoso romancier Douglas Glover is back in the GB house with an Epigram on the coming international order, grosso modo.

< Back to current issue brief